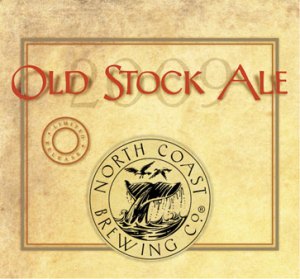 I selected North Coast Brewing as my top brewery in the Southwest bracket (aka: The California Bracket), so it’s no surprise that I tend to enjoy all of their offerings. While the Brother Thelonius would be my hands-down favorite from the brewery, I also love their “Old” triumvirate (Old Rasputin, Old #38, and Old Stock Ale). Of those three, the Old Stock is the one I’ve sampled the least so I decided to remedy that with a tasting note.

I poured the Old Stock from a 12-ounce bottle that I had let sit at room temperature for about 30 minutes before pouring (into a flared GuldenDraak goblet…I need to expand my beerware collection). The appearance is gorgeous…a luxurious, cloudy, toffee/caramel color with a dense cream-colored head (that sadly doesn’t last as long as you’d like). It looks exactly how you want an old ale to look…like it’s been sitting in a dusty cask in the basement of some ivy-covered, British pub.

The aroma is surprisingly mild, despite the extremely strong 11.5% ABV. There’s the slightest hint of hops around the edges, but the top notes are all malt…sweet caramel, some fig and raisins, some sour undertones and maybe a hint of cherries. The mouthfeel is wonderful…thick, rich, chewy as bubblegum…it coats your mouth like wine.

Unfortunately, the key factor in any tasting note is, of course, the taste…and that’s where the Old Stock let me down. This was a 2009 offering and it could probably have stood to be aged for another twelvemonth (just finished Pride and Prejudice and Zombies and I’m going to start using “twelvemonth” instead of “year” for at least another couple weeks…should be extremely annoying). The alcohol content is simply too overpowering and overwhelms the subtle, rich flavors underneath. Dark, dried fruits (currants and raisins mostly) seem to make up the bulk of the flavor. That sweetness I expected was drowned out by the bitterness of the alcohol (which also absolutely crushed the hopes and dreams of any hops that were trying to get noticed in this brew). There was so much potential in this beer and I can’t help but think that a few more years of aging would have mellowed out the booze and left something really special. It’s a hell of a beer…just not quite the kick-ass Old Ale I remember from my California days.

Drinkability suffers with this brew like it does for most Old Ales. It’s simply too strong and too bold to serve as a session beer. This is a “one and done” if ever I’ve had one, but that’s by no means an insult. I liked Requiem for a Dream a lot…doesn’t mean I’m watching it again.

Overall rating…3 Hops. Another few years in a cellar and it probably jumps up to 3.5, but I just can’t rank it higher than 3 when I had a hard enough time plowing through just one of these. Of course, with the high alcohol content, I can almost guarantee the second one will taste better…and the tenth one will be spectacular.