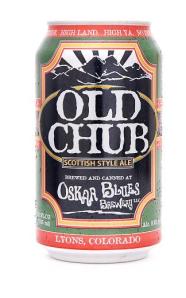 We’ve talked about the Oskar Blues Brewery a number of times here at Aleheads. It’s a particular favorite of mine both for their extremely high-quality offerings and their whimsical take on craft brewing. The most notable feature of all of Oskar Blues beers is their packaging. It was the first microbrewery in the country to package and  sell their beers in cans.

Oskar Blues was founded by an Alabama native named Dale Katechis in the lovely hamlet of Lyons, Colorado. The brewery was opened in 1997, followed by a brewpub in 1999. Dale started canning his beers a few years later. The first beer he canned was his bold, hoppy pale ale (Dale’s Pale Ale). Why cans instead of bottles? At first, he did it just because it amused him. Drinking such a wonderfully potent craft brew out of the most plebeian of beer delivery vehicles was richly contradictory. The gimmick also made Oskar Blues a darling of the craft beer world and helped put the small, Colorado brewery on the map.

Today, numerous high-end breweries have begun canning their beer. As I picked up a sixer of Oskar Blue’s Dale’s Pale Ale and their Old Chub at a package store in Colorado, I noticed a number of canned offerings from the New Belgium Brewery…including their flagship Fat Tire. What was once a gimmick has turned into a very legitimate method for storing and selling beer. Why? A few reasons:

But how does it taste? I cracked open Oskar Blue’s renowned Scotch Ale, the Old Chub, to find out.

The beer poured a very dark mahogany with some pretty, red highlights. Wifey McHops noted that it resembled Dr. Pepper and I couldn’t really argue. The head was full, off-white, and lingered for quite awhile. I was surprised at how light-colored the head was compared to the beer. Wifey declared that it was the color of the pureed lentils that we had just made for Baby McHops. Her color-analogy skills are clearly beyond reproach.

The nose had a huge malt profile. The only bitterness was from a slight alcohol tinge…the Old Chub has very little hops present. Some yeast notes were detected and there was a background smell of mustiness and mung (the goo stuck on the basement floor of a fraternity after a particularly rowdy night). Wifey pointed out that the smell was excellent, but it triggered mucus production in the back of her throat. Sure. OK.

The taste was as malty as the nose implied, but for such a huge, robust flavor, it was an incredibly smooth beer. There’s a slight alcohol aftertaste which lingers and some prevalent flavors of smoked wood, peat, and Scotch. The Old Chub is extraordinarily well-balanced for a strong, Scotch Ale (8%) and it has a slick, not thick, mouthfeel (good “mouthlegs” as the wife would say).

I found the Old Chub to be highly drinkable for such a strong brew. The maltiness is certainly the dominant flavor, but there is so much more to the beer than that. It’s extremely easy to drink for the style and it looks and tastes exactly like a Scotch Ale should. The Old Chub also gets major bonus points for being in a can. After draining my glass, I drank another straight from the can and it was just as delicious. I loved the cognitive dissonance of drinking such a bold, robust brew out of the most humble of beer containers. 3.5 Hops from Brother Barley for this beautiful offering from Oskar Blues.