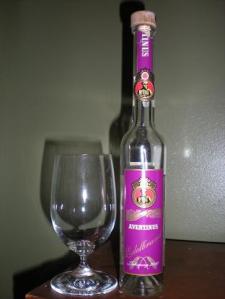 There’s been a great deal of talk by The Aleheads on the “Who can make a boozier beer” phase that the industry is going through.   To be quite honest, I don’t give a rat’s ass who makes the strongest beer in the world.  BrewDog, Dogfish, Sam Adams, Schorschbrau – You all make a bunch of high ABV beers, good for you.  I suppose it’s a cool concept, but at the end of the day, it’s simply a pissing contest that’s gone way too far and has become a silly little game.  If you really want a “Beer” with a ton of alcohol that will knock you on your ass, why don’t you just belly up to  some Beer Schnapps?  No games, no gimmicks, just good old-fashioned distilled beer.  Now that’s a concept!

I first came across Beer Schnapps (a.k.a. – Beer Brandy, Edelbrand, Distilled Beer, Beer Whiskey) about 5 years ago while talking to an importer of mostly German and Belgian brews.  The process is fairly simple.  Take your fully fermented beer, really the brew that’s ready to go to consumers, and toss the whole lot into a batch still or pot still.  What the brewer is doing is separating out the alcohols to come away with a clean product.  First they’ll discard the lighter alcohols and any compounds that have a low boiling point.  Next you’ll reach a point in the boil where all the good stuff will come out, a liquor that will come reach around 45% alcohol by volume on average.  In the end the heavier alcohols will pour out, the fusels and esters that lend some really awful flavors to any batch of beer.  What you’re left with is a clear distillate that retains all the good alcohols and some of the flavors of the original beer.  Varying the heating and cooling temperatures allows the brewer to tinker with any flavor profile that they’d like.  Cooling at a higher temperature will leave some of the subtle nuances of the hops and malts that were present in the starter brew.  Higher temps will boost the ABV but will strip away some of the “Flavor” in the end.  Some brewers even add a small sample of finished beer back into the distillate to lend some flavors and balance to the product.

I’ve had the pleasure of sampling three different Beer Schnapps over the years.  The first had been from the brewery Schlenkerla in Germany, known for their Rauchbier where they use smoked malts that give their beers a “Bacony” finish (Seriously, it’s liquid BBQ).  What I remember was a product that tasted like a cross between Scotch and Vodka – Kind of a smokey clear liquid.  Not bad at all.  Next came a product from the brewery Vapeur in Belgium, a distilled version of their classic Cochonne Belgian Strong Ale.  The brewer did indeed add a bit of beer back into the bottle, but it didn’t do much to the flavor profile and instead just lent a brownish hue to the product.  While those tasting notes are from memory, I’m proud to say that I still have a bottle of Beer Schnapps at home that Sudsy and I tucked into this past weekend.  I give you Bavaria’s own Schneider Aventinus Edelbrand.

The contents of my 100ml long, slender, corked bottle is the result of distilling the legendary Aventinus Weizenbock – A delicious brew that is not to be missed.  The appearance of this 42% ABV firewater is obviously clear, but what Sudsy pointed out immediately were the incredible “Legs” left behind in the bottle after pouring into a short snifter (As well legs in the glass after the first sip).  Nose doesn’t present much other than plenty of booze and grain.  Since I’m an idiot, I swirled my glass and got hit with a strong waft of rubbing alcohol (Always a no-no to swirl spirits, this is not wine or beer after all).  Taste is assertive, quite dry, and has that lovely burning feeling that accompanies many higher alcohol spirits.  I picked up grape seed, grains, and maybe a sherry or port presence.  The profile reminded me of a fine Sake even though that’s a brewed beverage with a third of the alcohol content.  Just similar notes throughout.  Drinkability is low, more of a novelty than anything else.  Still cool just the same.

I won’t give the Aventinus Edelbrand a hop rating since it’s not a beer and rather a distilled beverage.  I rate it highly however and would definitely recommend it to anyone that might be travelling through Germany in the near future (Sorry, not sold Stateside).  In the beer world there are very few surprises.  Beer Schnapps is sure to surprise the hell out of anyone that tries it.

3 thoughts on “SOMETHING SCHNAPPI IN THE AIR”