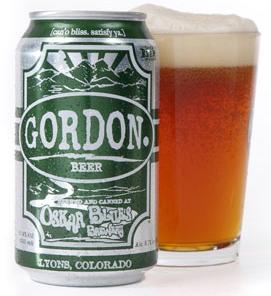 Next up in our Philly Beer List tasting note series…the inimitable Oskar Blues Gordon. We’ve written about the spectacular Oskar Blues Brewery in these pages many times, but we’ve yet to talk about the Gordon…arguably their finest creation (unless you’re a Stout guy in which case the Ten FIDY is the clear champion). I sampled this fine brew on tap at my favorite Philly bar, the Eulogy Belgian Tavern.

The Gordon is hard to categorize…Oskar Blues calls it a Double Red Ale while BeerAdvocate has it listed as an Imperial IPA. I prefer to think of it as an Imperial Red…like Terrapin’s Big Hoppy Monster. As someone who loves big hop flavors but craves a hefty malt backbone to balance things out, the Imperial Red style is right in my wheelhouse. So it should come as no surprise that when one of my favorite breweries meets one of my favorite styles…the stars align for Brother Barley.

The Gordon pours like a hazy, sun-drenched summer’s day. The brew is amber with golden highlights and a cloudy, dreamy center. It’s a beer you can get lost in. The head is the color of lightly-toasted meringue and it never truly dissipates. Strong, ethereal lacing hints at the persistent carbonation and full-bodied nature of the brew.

The aroma shows you just how talented the Oskar Blues brewers are. Taken separately, either the malt aroma or the hop profile would simply be too much. Without the hops, the malt is sticky-sweet caramel and tooth-aching toffee. Without the malt, the hop nose is pungently bitter grapefruit, oily pine resin, and a heapin’ helpin’ of good old-fashioned weed.*

*Cans of Gordon have an amusing catchphrase at the top which reads: “Can o’ bliss. Satisfy ya.” A clever pun on the Latin name for weed…Cannabis Sativa.

But together, the malt and hops aromas are like Tango and Cash. They meld beautifully, stimulate your olfactory bulb in wonderful ways, and manage to kill Jack Palance just before the building explodes. And the taste? Whew. The Oskar Blues website uses words like “unctuous”, “luscious”, and “sticky”. That about sums it up. It’s like drinking carbonated caramel…ooey gooey, wickedly sweet, and malty as the day is long. But before  your body goes into diabetic shock, the hop brigade arrives and scrubs the sweetness away from your tongue with their bitter brooms and citrus sponges. The faintest wisp of alcohol burn arrives in the aftertaste thanks to a solid 8.7% ABV.

Granted, the Gordon is not the most “drinkable” beer on Earth. Other than the molasses-thick Ten FIDY, this is the most toothsome brew Oskar Blues makes. And I wouldn’t exactly call it refreshing. But I WOULD call it absolutely fucking delicious…and I am BEGGING the brewery to begin distributing in Alabama. Dale Katechis! You’re from here, for the love of Hops! Ship me some cans of your beerly goodness! 4 Hops for the Gordon. Mmm.