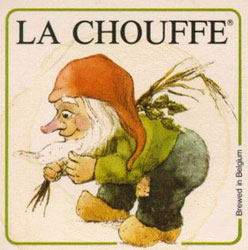 HEAD: Massive, pillowy, fluffy white head on top of the pitcher. It faded into small islands which seemed to be at war with one another until the center island defeated its satellite neighbors.

LACING: Good. Sporadic, but holds high on the glass.

NOSE: The malt profile is mostly grass and grains like a Saison or Biere de Garde, but on top of that are loads of fruit (green apples and pears), spice (mostly lemony coriander), and a nice, funky, yeast aroma. It’s actually a fairly subtle, muted nose so it’s hard to pick up everything. Very pleasant though…

TASTE: The fruitiness hits you first…somewhat pungent unripe apples and citrus. It fades into a grassy, almost lageresque malt flavor before finishing with a crisp, dry spiciness. Though there were no hops present in the nose, I definitely get a little hop bitterness in the very tail end of the taste.

DRINKABILITY: Not quite as challenging or interesting as d’Achouffe’s brilliant “Tripel IPA”, the Houblon. But what it lacks in complexity, it more than makes up for in drinkability. The Aleheads split a pitcher of La Chouffe at Eulogy and it was gone before we could blink. Refreshing, with a great mouthfeel and subtle aroma…this is an easy-drinkin’ Belgian.

One thought on “LA CHOUFFE D’ACHOUFFE”