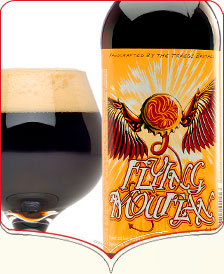 We at Aleheads have, in the past, gushed rather effusively in favor of the outstanding Tröegs Brewing Company.  Headquartered in Harrisburg, PA, Tröegs is the brainchild of Chris and John Trogner – two brothers with a will, a way, and dreams of craft-brewed goodness.  Since 1997 that dream has been realized by way of nine tremendous libations.  Their Nugget Nectar amounts to nothing less than a groin-grabbingly bitter romp to hophead nirvana.  It was, therefore, with considerable mirth that your Baron tucked into a 22 oz. Tröegs Flying Mouflan barleywine, described by John Trogner as “[P]ushing Nugget Nectar off the side of a cliff.”  The consequence of such reckless abandon?  Pure Alehead bliss.

The brew poured a rich, ruby mahogany chestnut with a crisp, thick creamsicle head that yielded to gorgeous lacing as the foam dissipated.  The nose was truly unbelievable: huge notes of carmel, burnt sugar, fig, and cocoa with just a touch of anise.  The first sip went down spicy, hot, and sweet, courtesy of Warrior, Chinook, and Simcoe hops balanced by Euro Pils, Vienna, Munich, and Dark Crystal malts.  A majestic palate of flavor expanded across the palate as the drink warmed: tart pine, lush chocolate, fig, sugar, and roasty toasty goodness.  Mouthfeel was viscous and oily with solid alcohol heat on the finish.  At 9.3% ABV and 100+ IBUs, this monster left your baron regally lethargic, swooning of an easy 3.5 hops rating, and hailing the good brothers of Harrisburg.  Flying Mouflan won bronze at the 2008 Great American Beer Festival, and it’s easy to see why.

With brews like these on tap, we can’t wait to see what Tröegs does next.