It’s icy here in the flatlands today.  Icy and cold.  Frau Direktor is down the street letting the Bubchen run himself silly with a friend and I have a few moments to myself.  Having chosen education over litigation*, I am sitting at home blessing the quarter inch of ice that has afforded me this opportunity to sample the spoils of the Commander’s Kentucky conquest.

Robert the Bruce Scottish-Style Ale hails from the remarkable Three Floyds Brewing Company somewhere in Indiana–a state which even the local Ohioans consider to be “flyover” land.  The few beers I’ve been blessed to try from Three Floyds have all been exceptional, so I had high hopes on cracking this one, and it definitely didn’t disappoint.

* Ed. note: this is apparently a dig at the Commander’s chosen profession (aside from his avocation, i.e. “commanding”). 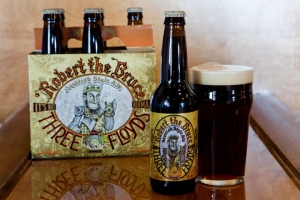 Robert (I’m now on my second, and I feel we’ve reached a first-name basis in our relationship) poured with a nice full head that lasted for a good while.  The reddish brown** color made me feel warm before I even put it up to my lips.

** This may be inaccurate.  I’m color blind and there’s a serious dearth of natural light in this God-forsaken place this time of year.

The smell?  Smelled like beer to me – really good beer.

The taste?  Ah, now I can talk about that.  Scottish Ales aren’t beers I’m typically drawn to, because that sweet malty taste tends to stay around too long.  Robert showed up with the malt present, but I’m pleased to say it didn’t overstay its welcome.  Caramel, butterscotch and chocolate tastes at the start were followed up by a nice alcohol warmth (not the slight burn of say an Old Chub, my favorite representation of the style to date).  There were enough hops present to clean things up, but not so much as to remove the memory entirely.  The warmth had some staying power though, just a like a Scottish should.  It’s helped give me the resolve to fight through the rest of this ice storm and put my best effort into hoping for another “snow” day tomorrow.  I give it… 3.5 hops.

Na zdrowie (from the Frau)

Herr Direktor is a Colorado native who spends his days teaching and playing trumpet, his weekends snowboarding, mountain biking and playing ultimate frisbee, and his nights drinking beer.  He joins us from his home in Central Ohio, where he enables the Commander (a man who truly needs no enabling) and lives with his frau and bundchen.  He sends his warmest greetings to Lord Mashtun Copperpot, because he doesn’t know better.