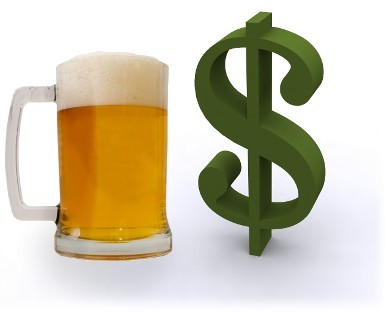 Last month, the Czar surprised the rest of the Aleheads with a fairly coherent analysis of the amount of money he has spent on beer this year (we suspect that his long-suffering manservant Karl actually tallied the results). We begged the Czar to make the breakdown into a post for our readers. In typical Czar fashion, he claimed he would “add it to my list…just as soon as I finish shaving my balls”. That’s Czar-Speak for, “don’t hold your goddamn breath”.*

*The Czar NEVER shaves his balls.

I would have just let it go, but I was kind of curious as to what the rest of the Aleheads had laid out in beer purchases this year. I haven’t delved into my own spending habits yet for the sake of my marriage, but I plan on eventually conducting a Czar-like analysis one evening after Wifey goes to bed. Here’s the Czar’s initial e-mail to the crew:

I was interested in seeing the difference between my annual spending on cheap swill last year versus craft beer this year. It’s a perfect time for a comparison since I’ve had almost no macro this year thanks to my being released from the bonds of cheapness by the false pursuit of expertise.

Anyway, my drinking costs went WAY up, but that’s partly because I’m drinking more to drown out the voices in my head (and the ones crying in their cribs/beds and Svetlana) and I’m buying significantly better beer and sharing more of it with friends (freeloaders). Still, the number is quite high (for a regular person, perhaps not for an Alehead). I think I cleared about $3500 on beer spend so far this year (Ed. Note: This e-mail was written in mid-October, so the Czar still has/had another 2.5 months of drinking to go). This includes the beers I bought and shared with people. Note that beer prices are much higher in NYC when you have to buy a sixer for $15.

–About 5% (only) is growlers (they heavy, man)
–8% is keg beer for Vlad, Jr.’s birthday party
–30% or so is beer at bars and restaurants
–0.1% on homebrew (usually free but I’ll always pay $8 for someone’s brother’s chili and bacon saison)
–9% is on cans of Sixpoint – everything they make – even their slightly oversweet lager (The Crisp) is GREAT. I usually put two cans of sweet action in my jock as I pound a bengali tiger while balancing a righteous rye on the tip of my penis while screaming “you’re next peppermint patty” (Ed. Note: This scenario is wholly fictional. The Czar has terrible balance).
–The rest of my expenditures are on bombers/sixers as I can find them. I haven’t collected any beers to drink later because I don’t have room for them. Also, the thought of storing ‘verticals’ makes my face crinkle up.

–I don’t go to sporting events, but do attend occasionally other events that have overpriced beers
–I don’t drink every night, but wish I did
–I still drink martinis FIRST, so fuck you.

I was thoroughly intrigued by this breakdown, so I asked the Czar to explain how he determined the percentages. I fully expected an ad hominem attack and some swearing, but curiously, the Czar actually sent back a thoughtful discussion of how he arrived at his figures. Again, I’m sure Carl was heavily involved in this response. The somewhat proper grammar is a dead give-away.

Here is how I have a somewhat accurate estimation:

Kegs: I only bought kegs once this year for Vlad, Jr.’s birthday party (he turned two). They were kegs of Sixpoint and we didn’t finish them. I actually gave the leftovers to some idiots going to a lakehouse directly after the party for the weekend and THEY failed to finish them too, so I remember to the penny how much I spent on them and how worthless my friends are when given the simple task of FINISHING YOUR FUCKING BEER.

Growlers: With this one, I just remember. I have three growlers from Whole Foods. I fill them up each time I go with beers that average about $13 a growler (usually one pilsner at 9.99, an IPA at 12.99 and something stupidly alcoholic at 15.99 or 17.99). I don’t usually take the effort to walk three growlers back with 50 lbs of groceries the fifteen blocks to my house so it’s easy to remember how many times I’ve refilled.

Restaurants: In a strangely consistent manner, alcohol purchase are about 1/2 the tab any time I go out, irregardless of what I drink or what I eat. I’ve seen it so many times I think it’s a good estimator. I simply took my portion of my restaurant expenditures divided by the number of people there (usually 2-4 people unless it’s a big event and I get fucked on the bill in a stupid attempt to get points on my credit card). Despite the fact that I live in NYC (going out is cheaper and less hassle than eating in often) I have two kids (we never go out) so this wasn’t a ridiculous thing to count up (esp. since it’s easy to sort Amex charges). I don’t always drink beer (say it together… but when I do, I drink it poured down your sisters chest), but it’s become about 80% of the liquid refreshment I take so I just make a martini allowance here and there. Wine is a pretty rare drink for me unless I’m drinking it socially.

Bars: This one is either waaay over or waaay under. It’s hard to tell with multiple tabs and some sloppy nights. However, it doesn’t matter that much. I don’t get to get out much with the kids so when I do I generally blast myself with fun/expensive beer even if I’m being wasteful. For example, I went out last week with a buddy – we went to three beer bars, a vodka tasting (that was first) and at the last bar I ordered four pints, knowing I’d only drink 1/4-1/2 of each one before having to leave to get home. In this case I made the call to be more respectful to my family than to beer. I was also drunk enough not to remember even what beers they were (now) so I guess that was kind of a ridiculous call.

Bottles/Sixpoint: I just recently really started drinking Sixpoint like water and I’m not tired of it so I’ve got a pretty accurate count of that crap, just by memory. When I buy, I always buy 4 – one each of the bengali, rye, crisp and sweet action fourpacks. As for bottles, as many of us do, I binge purchase beer when I have the opportunity to go to bottle shops or the supermarket. I don’t really look that the price right now, not because I’m particularly profligate but because it always makes me choose worse beer and I’m not ready to buy by value yet. It’s easy to remember that my $397 purchase at whole foods was $177 beer because of the sticker shock I got at the checkout – WTF! Of course, I ran and grabbed a couple of Sixpoint fourpacks before finalizing it. Why is beer better than food? Because you can leave it in your fridge for a month and not have to throw it away.

Anyways, you may disagree, but I thought this was worth sharing with our readers. If you do the math for the remainder of the year, the Czar comes out spending about $4,500 total. Since the holidays tend to be the biggest drinking time of the year, we should probably bump that up to about $5,000. A pittance for the deep pockets of the Czar. What about the rest of the Aleheads and our dear readers? Have any of you outdone our free-spending Czar? What kind of damage are you looking at this year (I mean wallet damage…not liver damage)?

Also, yes, I know that the Czar’s plan was to compare his spending this year with last year’s more macro-focused consumption. But the Czar isn’t exactly one to keep his train of thought on track. The fact that his analysis was THIS cogent is a minor fucking miracle.

4 thoughts on “THE YEAR OF DRINKING LAVISHLY”