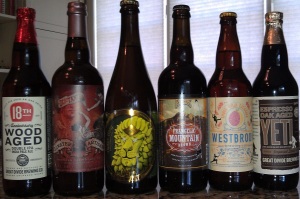 I spent last week eating lobster rolls on Cape Cod with Smiley Brown and our various daughters and wives. There will soon be a number of posts about the beers consumed on said vacation (Spoiler Alert: Kate the Great, Black Tuesday, and a nearly 60-year-old bottle of Ballantine Burton all made an appearance thanks to Mr. Brown’s epic beer cellar).

While the week was delightful and highly beer-centric, it did force me to miss one of the most exciting days in Alabama craft beer history. On August 1st, Alabama celebrated “Bomber Day”. Up until last Wednesday, Alabama was the only state in the nation in which you couldn’t legally purchase a 22-ounce or 750-ml bottle of craft beer. But thanks to the tireless efforts of Free the Hops, the law was changed in May and went into effect on the 1st. Alabama’s Aleheads stormed their local package stores to buy up the big beers, but due to my vacation, I missed the festivities. I know, I know…cry me a river.

We got back late Saturday night, so as soon as noon rolled around the next day (no alcohol sales in Jefferson County until noon on Sunday), I hit up the grocery store and snapped up the above line-up of bombers. Granted, there’s nothing in there to get your panties in a wad about, but it’s the principle that matters. Last night, I cracked into my first bomber of beer that I legally purchased in Alabama.